The world got a little smaller for us this August 18, 2017 when we partnered with Dove Westgate Church in Pennsylvania for a community outreach at the old train station in cute downtown Ephrata. Outreach organizers from Dove Westgate had participated in the same YWAM ministry at the Montreux Jazz Festival in Switzerland the past few years with us and had the idea to bring us in for their local event. It was almost overwhelming to reunite with so many whom we've only seen in Switzerland.

Rain was in the forecast on August 18th so we were all watching the weather closely. Indoor options were not available so organizers made the call to proceed in faith that the show could go on. We arrived several hours prior to the event to set up. Almost immediately, torrential rains and wind put a halt on progress. We waited out the rain until it seemed all was clear. We began to set up equipment while others swept, squeegeed and used leaf-blowers to dry off the pavement. Things were starting to dry when another rain dumped on us.

After a second round of sweeping, squeegeeing and blowing, the pavement was nearly dry and ready for the UniShow. Several hundred came to the event and enjoyed food and music from the church, along with the UniShow.

Despite the stress surrounding the show, we are thankful for the opportunity to share in the Ephrata, PA community. Afterward several individuals talked to Dustin at length, thanking him for his message and testimony that hit them right in the heart. 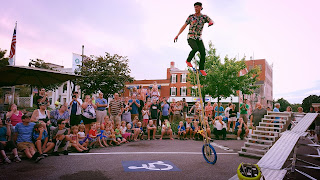 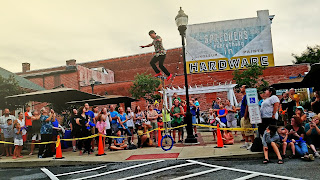