We never tire of the privilege of partnering with high school students to share the Hope of Jesus with their peers.  It is so exciting to see Jesus being boldly proclaimed on public school campuses.

May 27th marked the first ever My Story event in Minnesota's District 196.  Rosemount High School hosted but students from four high schools led the event and invited their classmates.  Eagan, Rosemount, Apple Valley and East View were represented.

After setting up, the students fervently prayed for their friends to meet Jesus that night.  A thorough rehearsal, consuming of subs and chips, and more prayer followed before the show was underway.   A game, drama, interviews with pro athletes and UniShow teaser surrounded student's powerful stories of how God set them free from depression, destructive choices, suicide attempts, insecurities and gave them new life in Him. Then Zane Black landed the plane with the clear and simple Gospel message and many responded to the invitation.

Though Dustin's knee was causing him great pain due to a reaction to recent Synvisc One injections, through God's strength, he was able to still perform.  In his weakness God was strong through his sharing and several leaders separately summed up his message as "on point".

It's encouraging and inspiring to see so many teenagers not ashamed of the Gospel because they know it is the power of God for salvation to everyone who believes (Romans 1:16).

Matthew 10:32, Whoever acknowledges me before others, I will also acknowledge before my Father in heaven. 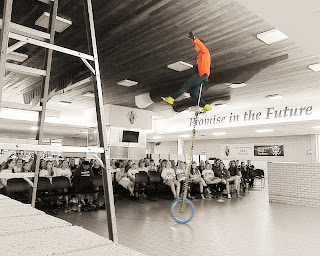